Court. Tennis is played on a rectangular area with a flat surface and a marked markings – the court. In the middle of the court is stretched net, which runs the whole width, parallel to the back lines, and divides the court into two equal halves. The length of the court is 23.77 m and its width is 8.23 m (singles) or 10.97 m (doubles). The lines along the short sides of the court are called back lines, along the long sides – side lines. Beyond the boundaries of the lines is extra space for the movement of players. The court shall also mark the service court by means of service lines parallel to the baselines and the net, placed 7 yards (6.40 m) from the net and drawn only between the singles sidelines, and a center service line which is drawn in the centre of the court and parallel to the sidelines and between the service lines. The service center line shall also be shown on the net with a vertical white band extending from the court to the top edge of the net. The backboard lines shall be marked with a short mark indicating their middle. All lines drawn on the court are part of the court. A ball hit or barely hit by a line shall also be counted. Thus, the outer edges of the lines are the boundary of the court. 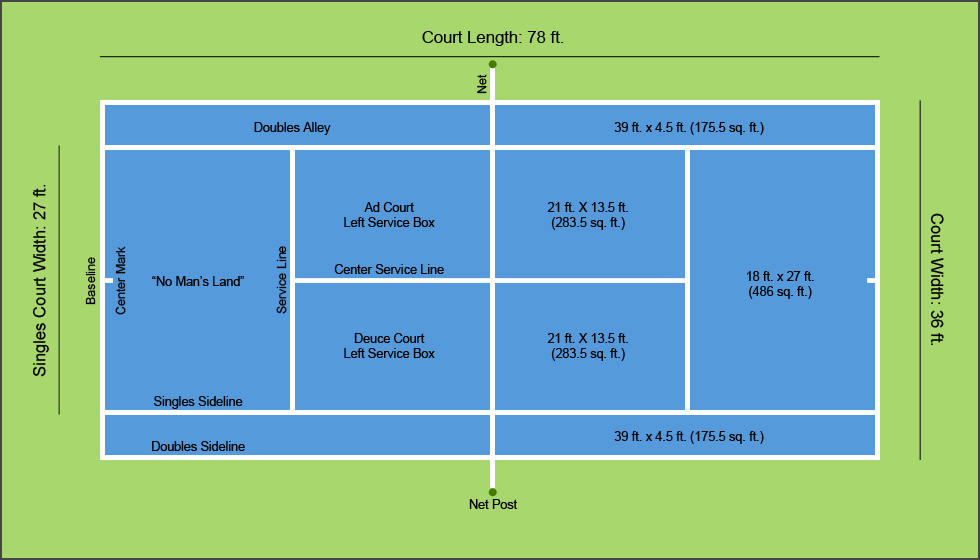 There are different types of tennis court surfaces: grass, dirt, hard, or synthetic carpet (artificial grass, acrylic surfaces). Standard size of a tennis net is 1,07 m x 12,8 m and has square cells with sides of 40 mm. Fasteners can be classic screw or metal.

Racket. To hit the ball, the player uses a racquet, which consists of a handle and a rounded rim with strings stretched. The stringed surface is used to strike the ball. The rim for racquets was originally made of wood, nowadays – from complex composites consisting of ceramics, carbon fiber and metals. Read “How to choose a racket.

Ball. A hollow rubber ball is used to play. The outside of the ball is covered with fluffy felt to give certain aerodynamic properties. Balls used in major competitions should meet the established criteria, which include size 65.41-68.58 mm, weight 56.0-59.4 g, the level of deformation, as well as color. The yellow and white colors are approved by the United States Tennis Association and the ITF. Fluorescent yellow, also known as optical yellow, was introduced in 1972 as the most prominent color for television, while other bright colors may be found in amateur sports.

Rules of the game

Players (teams) are on opposite sides of the net. One of them is the server and puts the ball in play, serving. The second player is the receiver of the serve. The task of the players is to send the ball with strokes of the racket on the opponent’s side, while hitting the ball in the boundaries of the court. The player must have time to hit the ball before it touches the court more than once. It is also possible to hit the ball without waiting for it to fall on the court – play from the flight. The player who made a mistake loses the game, and his opponent scores a point.

Players need to score points to win games (a minimum of 4 balls: 15-30-40-game, but with a difference of at least two balls). A player is given two attempts to serve. The player serves alternately to the left and right quadrants. If the ball hits the net and hits the correct square, the service is replayed. After the game is played, the service goes to the opponent. After an odd number of games the players are given a one minute break and the game is changed. The player who was the first to win 6 games (provided his opponent won no more than 4 games) shall be deemed to have won the “set”. After the score in a set is 5:5 to win a set it is necessary to win two games in a row. When the score is 6:6, as a rule, a tie-break shall be played (winning at least 7 balls, but with a difference of not less than two balls). To win a match you must win 2 out of 3 or 3 out of 5 sets, and the total possible number of sets (3 or 5) is initially set by the rules of the competition. As soon as one of the players reaches the required number of won sets, the match is over.